Available now as one half of the first M-Brane SF Double, a new science-fiction short novel.

“Maybe Tuesday will be my good news day.”

When bombs destroy the nursery at Haven, the people and government of Rahab must reconsider their assumptions about how their world works and how it is to continue into the future. Were the terrorists the authors of the New People’s Manifesto, a seditious document demanding the Ministry of Births do all in its power to encourage a new generation of men equipped to find love and fulfillment with other men? Or was it the god botherers, a secretive cult that believes not only women were meant to die as a result of Eve’s judgment but all life on Rahab?

A young businessman, Jafet, a man extraordinary only in that he once knew passion, survives the bombing of Haven’s nursery. He learns that his long-lost love, the popular singer Evren, was also in the nursery—was widowed and gravely injured by the bombs. Because of Jafet’s sympathy with the aims of the New People, the Ministry of Safety & Security takes an interest in him. He nearly becomes infatuated with the operative assigned to watch him, only to discover Nisim is one of those unfortunates entirely incapable of comprehending intimacy with another man. The sad shock of Nisim’s rejection leads Jafet to explore his past, the idyllic days of his and Evren’s love and its painful end. As the nihilistic cult that attempted to end life on Rahab is uncovered and brought to justice, Jafet learns that he and Evren—and Evren’s dead husband, a man much like Nisim—are the first New People, whose lives and examples will change their world.

—Sandra McDonald, author of Diana Comet and Other Improbable Stories

Ever read Poul Anderson’s Virgin Planet (1959—out of print, but I found a bunch of copies on eBay)? A year or two ago I reread it for the first time in thirty-odd years. Earth colony ship carrying only women goes astray, crashlands on a relatively pleasant planet where (all the settlers being merely women) technological civilization collapses, the women reduced to picturesque barbarism, reproducing through some kind of mumbo-jumbo parthenogenesis. And then a virile spaceman from the civilized universe arrives! (It’s not quite as bad as all that.)

But you’ve probably heard of, if not read, Joanna Russ’s “When It Changed,” 1972 Nebula-winning short story that takes the Virgin Planet scenario and does it right.

Way back in my hapless youth, I started work on a novel that wanted to turn Virgin Planet on its head: the lost colony was all men! rediscovered by a spacewoman from the greater galactic civilization! Way back then, polite young men who moved in polite society, like myself, didn’t so much talk about such matters. It was a novelty. So naturally a respected s-f editor who happened to be an acquaintance of mine bought the book before I finished writing it.

But I was very young and didn’t know what I was doing and it ended up being a terrible, terrible, godawful novel. In so many many ways. Oh, I don’t like to think about it. My editor, correctly and with gentle tact, declined to publish it.

But it was a tremendous concept, the gay planet, don’t you think? Surely I’m not the only one it’s ever occurred to. And yet I haven’t seen it done. Not in the foreground anyway, and not in a way that spoke to me as a gay man. (Doesn’t mean somebody hasn’t done it—I’m lamentably underread these days—and if you know of an excellent example I’d be pleased to hear about it.)

Fast-forward some twenty-five years. I was laid off from my day job in the spring of 2008. It was a writing job. Not real writing—that is, anything I’d wish to attach my name to—but it was the first job since my massive, extended block hit that required composing brand-new sentences and paragraphs, so it had put some tone back into long underused muscles. Given the luxury of time, endless stretches of time, and basic expenses’ being covered by unemployment benefits, I felt I ought at least to try writing something I would want my name on.

Naturally I looked first to the inordinate number of incomplete projects encumbering my hard drive. Two months of flailing. Oh, it was relatively enjoyable flailing, what with its being spring then summer, and the not having to get up in the morning to go to an over-air-conditioned office. But all those projects were polluted by the block: I’d flailed at them in one way or another for nearly ten years.

What I wanted to do was write a big, new story. A big science-fiction story. What I did was flail. I had settings and ideas (I make up s-f and fantasy settings all the time—cheap entertainment—it’s putting stories into them I have trouble with), but no story, no characters. The last time I cared about one of my characters … never mind.

And then I became infatuated with Ivri Lider, gay Israeli rock star, whose lyrics I could read anything I wanted into, since I understand no Hebrew at all. The title of one of them, “Ha’anashim Ha’chadashim,” a spacy, deeply weird track, translated as “The New People.” (Title track to his third, strangest, CD.) There’s a sci-fi title if I ever saw one. Put Ivri in a sci-fi story called “The New People”! Yes! Not the viewpoint character/protagonist, that would be presumptuous, but the protagonist’s love object.…

Ivri Lider, “Ha’anashim Ha’chadashim,” from the CD of the same title
(Helicon Records, 2002)

And what better excuse to return to the gay planet and use everything I’d learned in twenty-five-odd years about story and character to get it right? So I got to work.

All of a sudden, I had a 23,000-word novella. (In revisions since, it’s expanded to about 30K.) It was hell—in six weeks I dropped ten pounds I really couldn’t spare. The kind of hell I’d been aching to get back into for nine years.

Christopher Fletcher, maniacal mastermind of monthly ’zine M-Brane SF and M-Brane Press, decided a year or so ago to experiment with resurrecting the tête-bêche format of the fondly remembered Ace Doubles, in which two (short) novels are bound back-to-back and upside-down with respect to each other. I’m pleased as Punch to have The New People as part of the experiment.

The New People’s Judy is Brandon Bell’s Elegant Threat, a thrilling adventure set among the strange worlds of the far, post-human future.

NB: At some point in the production process, the acknowledgments I intended to append to The New People got overlooked. Not a big thing, all in all, and eminently forgiveable, but for the record:

Thanks to Betty Harrington for a sensitive, insightful, tactful reading of the first draft.

Thanks to Christopher Fletcher for publishing this later draft, to Jeff Lund for the artwork, and to Brandon Bell for sharing the covers.

Thanks to the late Terry Carr and to Robert Silverberg who, eons ago, rightfully declined to publish the first attempt at wrestling some of these themes into submission.

Thanks especially to Ivri Lider for the music that inspired and soundtracked the work, notably the exhilarating CD Ha’anashim Ha’chadashim and the blistering singles “Rak Tevakesh” and “Hasadot Ha’adumim.”

In the not too distant future, I expect to get back to work on a novel-sized volume about Rahab, the gay planet. A Boy’s History of the World is meant to incorporate The New People and the recently published stories “Annie” (2010) and “Jannicke’s Cat” (2009) into a larger narrative, but we’ll see if I can carry if off. Meanwhile, if you choose, you may consult the map of Rahab below (click for a larger PDF version) and read a summary history. 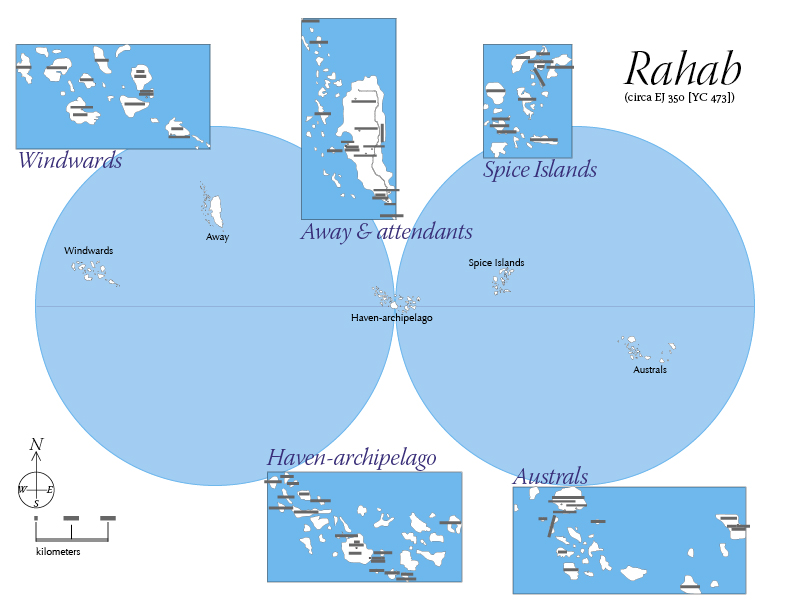