Out of the blue! (I just found about it this afternoon.)

I’m pleased to report that my novelette “Seb and Duncan and the Sirens” will appear in Glitterwolf, a handsome and handsomely named new(ish) British journal published thrice a year in print and electronic editions. The issue in question, #5, will be out before the end of the month. Here’s the cover: 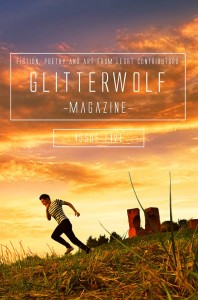 I probably should have tried a tiny bit harder to come up with a title that didn’t telegraph the whole story, eh what? It’s another young-Americans-on-European-vacation story—a theme I may exhaust one day. Or not. In this case codependent best friends and roommates Seb and Duncan from Boston, who run into guess who on an Aegean island. Hijinx ensue. I’ll stop there.

Editor/designer/publisher Matt Cresswell has posted the table of contents for Glitterwolf #5 on Facebook. I recognize the name of one (1) fiction writer but none of the poets or visual artists. New stuff, new stuff.