I will confess—nay, glory in—the fact that I nearly always read my own work aloud at some point. It’s the surest method I know to discover clumsy sentences and faulty rhythms, especially after one has stared at the black marks on the screen so long they’ve begun to make sense.

However, I am entirely unable to deal with audiobooks. Soon as I hear a professional orator begin narrating a story, my brain makes a frantic scrabbling rush in search of distraction. (This is not something that often happens when I read print.)

However however, I am well aware freak-mutants exist who adore the things. I expect they aren’t even the strangest monsters inhabiting this globe of ours.

For those mutant freaks, then, this note: Lethe Press and Audible.com have released an audiobook of my collection of wonder stories You Will Meet a Stranger Far from Home narrated by one Simon Ralph. Happened about a week and a half ago. I’m told, indeed, it’s Lethe’s audio bestseller for March. 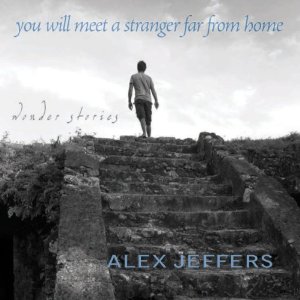 (I listened to about thirty seconds before I was driven screaming into a hell dimension of horror and remembered I could turn it off.)

But for you, monster, audiobook aficionado, here are links: Amazon or Audible. There’s even a teaser for my next novel, That Door Is a Mischief, in the form of the original short-story version of chapter one. Perhaps Simon Ralph’s melodious vocal stylings can stall your anticipation of that release. (September, probably.)