So, Jeffers, what is it you do with yourself when you’re blocked and bored and down (and between freelance design or editorial projects) as you so often are?

You mean, besides fossicking around the internets for untold unproductive hours like everybody else? Ach, well, sometimes (often) I glower resentfully at stalled stories, deleting or adding a word or two here and there as I reread until I reach the point where I stalled, glower some more, quit out. Sometimes I reread finished stories, a pleasanter endeavor all ’round until the inevitable moment of despair: I’ll never complete another.

And sometimes I make maps of imaginary places.

This, for instance, is a massively incomplete sketch map of present-day political divisions on the made-up world that once bore the nonce-title the world of the subcontinent but which I’m more inclined these days to call the Kandadal’s world. [Click image for a full-size version in a new tab.] 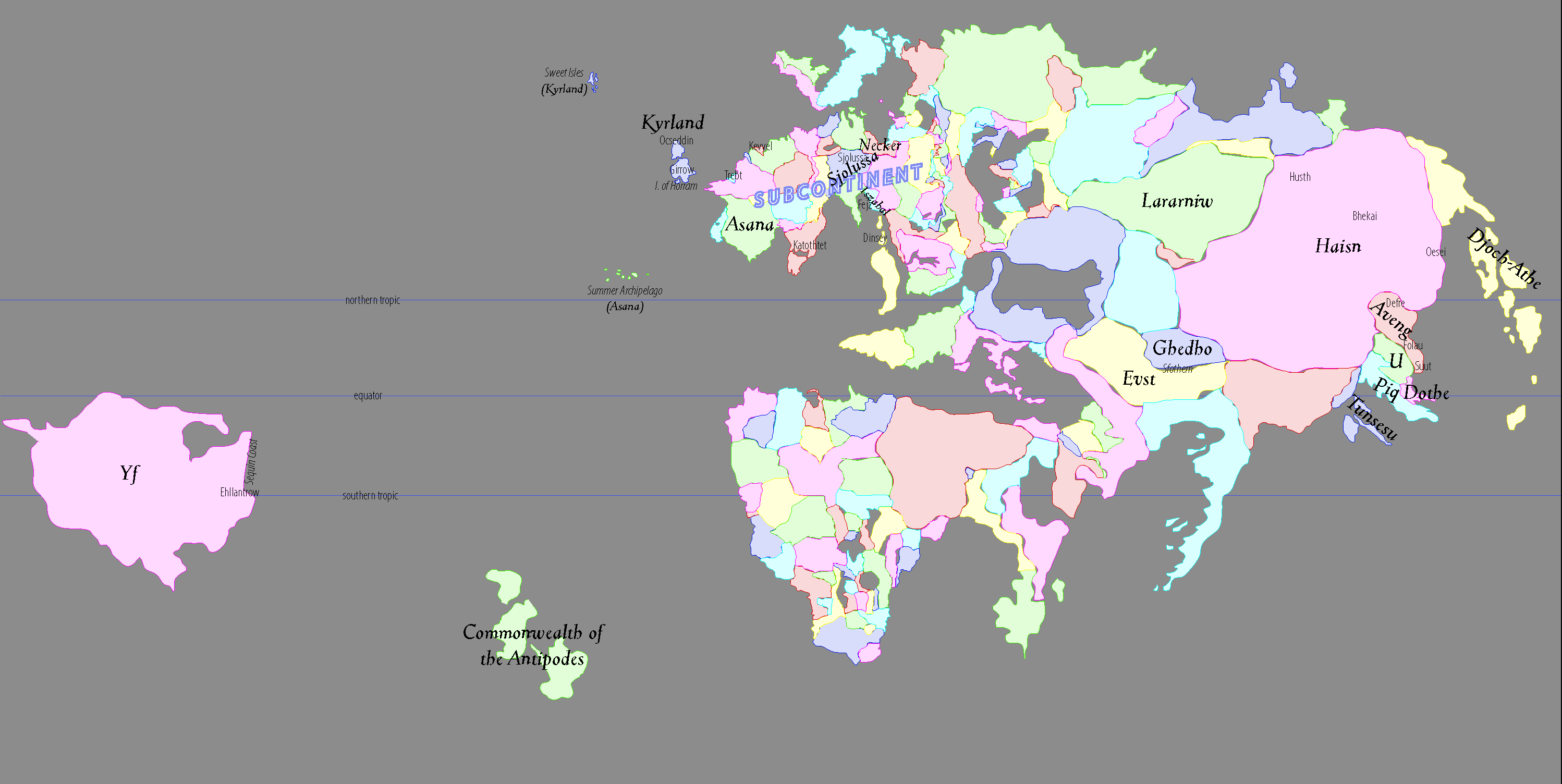 The Kandadal’s world is the setting of three completed stories and (at present) six more in progress. (Progress, he says. Laugh. Sob.) “Two Dead Men”—first published in Icarus 14, Fall 2012, and still available for purchase—takes place in the small, civil-war-traumatized city of Fejz in the subcontinental nation of Iszabal, with flashbacks to the narrator’s mother’s homeland, Aveng, halfway around the world. “The Other Bridge,” which you may read right here, is set in the former imperial capital of Sjolussa, with lengthy recollections of that expat narrator’s youth in post-colonial Aveng.

Both those narratives coincide with the period of the map: now, more or less, a time of clever hi-tech devices, international trade, instantaneous global communications, and rapid air travel. The third finished story, “The Oily Man”—which will appear in Handsome Devil: Tales of Seduction and Sin from Prime Books next February—is set some four hundred years earlier, in the latter days of the so-called age of discovery when adventurers of subcontinental nations (as then constituted) set out to find sea routes to the fabulous east. And incidentally render pointless Sjolussa’s immemorial position as subcontinental endpoint of the overland caravans.

The narrator of “The Oily Man,” useless scion of a merchant family in Trebt (four centuries later an independent micro-state but then a vassal state of the Great King, Sjolussa’s fiercest rival), is dispatched to Aveng, where he’s meant to curry favor with the queen on the Jade Stool and gain advantage for the Great Eastern Company. That doesn’t quite work out and (though not within the story) his failure signals the decline of the Great King’s influence in Aveng, opening Sjolussa’s way to annexing the country.

The Kandadal, by the way, that ancient mad saint and conscience of the world, is mentioned by the by in “Two Dead Men” but plays a major role in “The Oily Man.”

He also casts a long shadow over “The Tale of the Ive-ojan-akhar’s Death,” possibly closest to completion of the unfinished tales. This is an historical story as well, narrative of a minor functionary in the Sjolussene mission to the court of the Immortal of Haisn, the Celestial Realm, about a hundred and fifty years ago in early days of the age of steam.

The remaining five seem all to be roughly contemporary. I know almost nothing about “A Room Like an Eggshell” yet except that it involves a marquise of ancient family and her gigolo. It might be set in Asana, once heartland of the Great King’s realms, or the Summer Archipelago. I know quite a lot about “The Lake Is Not the World”—first envisaged of the lot—but not the name or location of the titular lake. Or how to write the story. “Etti and Sien” (I hope to discover a better title) returns to cosmopolitan post-imperial Sjolussa. “A Joke of the Kandadal” starts out on the Sequin Coast of Yf, that half-continent-size island nation and the only place in all the world utterly devoid of the numinous. Starts out there but will conclude, I believe, in the Vale of Sfothem where the Kandadal was born.

Finally for the moment, “The Cat in the Moon”—which Steve Berman reminds me nearly every time we speak I need to finish and which will likely end up at least a novella if not a full-length novel—is a gothic tale set in and around Castle Heddr in the West Country of Kyrland’s South Island.

Sometimes, other late-night early mornings, I compose and recompose and revise and re-revise long blithery posts for this blog….