Publishers Weekly, trade journal of the US book publishing industry, reviewed You Will Meet a Stranger Far from Home in the 14 May issue. Nice review, much appreciated. Although I can’t figure out how the reviewer got the impression all the stories were linked in any manner other than being written by the same guy.

(The same issue of PW also reviews Melissa Scott’s novella Point of Knives, second {in internal chronology} of the Books of Astreiant, about which I raved back in February.)

I’ll belatedly add that I have a very nice blurb for You Will Meet a Stranger from my friend Agnes Bushell, whose too few and too hard to track down novels you should make an effort to find.

What a cornucopia! Each story is a world, and each is more amazing than the one before it. The book is a like a jewel-case filled with these glittering, gorgeous, but very dangerous brooches! The pins are sharp! Barbed at times. And the writing is perfection.

Oh, and, Lethe Press has posted a freely downloadable PDF copy of “Firooz and His Brother” (The Magazine of Fantasy & Science Fiction, May 2008), which will reappear in You Will Meet a Stranger.

Yet more: genial and handsome Canadian short-story writer ’Nathan Burgoine, with whom I share two recent tables of contents but whose work I don’t yet know well enough, has declared May short story month. To celebrate which, he embarked on the project of reviewing one story a day from both of those TOCs on his RedRoom.com blog. ’Nathan’s reviews of Boys of Summer begin here (he looks at my “Wheat, Barley, Lettuce, Fennel, Salt for Sorrow, Blood for Joy” here), and The Touch of the Sea here (I expect him to post his look at my “Ban’s Dream of the Sea” on Wednesday, 16 May {edited to add link on 20 May}). My only disappointment in this project is that ’Nathan skips over his own stories, “Leap” in Boys of Summer and “Time and Tide” in The Touch of the Sea, both of which I enjoyed a good deal. 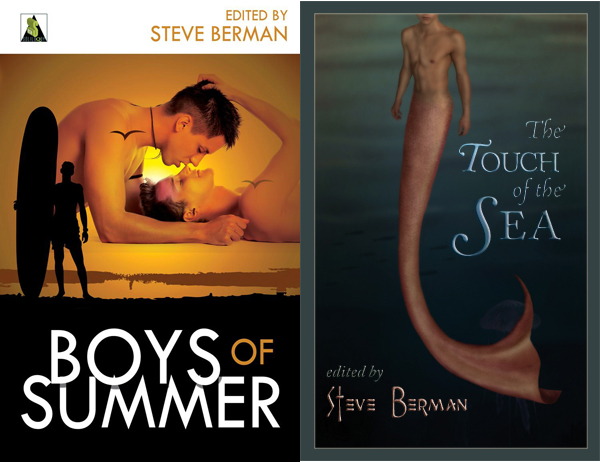 While I have yet to see any reviews of The Touch of the Sea, our blessed lord the internet has coughed up several of Boys of Summer:

In newer news about an older title, Speaking Out: LGBT Youth Stand Up (edited, like Boys of Summer and The Touch of the Sea, by Steve Berman, and in which my story “Captain of the World” appears) is one of three finalists in the Teen: Fiction category of the Independent Book Publishers Association’s 2012 Benjamin Franklin Awards. So that’s pretty neat. The awards will be presented early next month, I believe.

More? Oh, all right. I wrote my third story of 2012 last month. “Two Dead Men” (5,900 words) takes place in the same secondary world as 2012’s second story, “The Other Bridge” (announced at the bottom of this page), although they are otherwise unrelated. Inspired by the recent twenty-year anniversary of the war in Bosnia-Herzegovina, particularly the sieges of Sarajevo and Mostar.

Story #4, “The Oily Man,” in the works, is also set in that world. I don’t have a name for it—probably should, but its inhabitants just call it the world. Don’t have a map, despite my propensity for maps. Haven’t even named the continents and am not entirely clear on the locations of the nations and cities I have named. Placeholder collective title for the on-going group, Tales of the Subcontinent, refers to the secondary world’s analogue of Europe. “The Other Bridge” and “Two Dead Men” take place respectively in the subcontinental cities of Sjolussa (a former colonial power) and Fejz—with flashbacks to the tropical nation of Aveng—during the equivalent of our high-tech, post-colonial twenty-first century…but with, you know, magic and supernatural beings and incarnated gods.

Whereas “The Oily Man” is set centuries earlier during the messy period between the subcontinent’s Age of Discovery and its Age of Colonialism, the narrator a native of subcontinental mercantile city Trebt exiled to distant Aveng. This one’s intended for a 2013 anthology that hasn’t been announced yet (I have friends) but whose editor has expressed approval of the 3,000 or so words of first draft I’ve come up with so far.

Will I complete it this month? Up in the air. I have a terrifying pile of freelance copyediting I ought to be doing instead….

Finally, although I’m not ready to make a formal announcement, the third BrazenHead novella, a gripping dark fantasy, has been tentatively scheduled for publication in early November. But first we have to get Tom Cardamone’s brilliantly peculiar Green Thumb into your hands or downloaded onto your e-reader. August. Watch for it.