Our first release, Dayna Ingram’s exhilarating Eat Your Heart Out, is a finalist for the Golden Crown Literary Society’s Goldie Award in Speculative Fiction. Alas that BrazenHead is competing against our corporate overlords at Lethe Press, which has two titles (both of which I also designed) in contention for the same prize: Hellebore & Rue: Tales of Queer Women and Magic, edited by Catherine Lundoff and JoSelle Vanderhooft; and Heiresses of Russ 2011: The Year’s Best Lesbian Speculative Fiction, edited by JoSelle Vanderhooft and Steve Berman. Winners of all the myriad Goldies are due to be announced this coming Saturday, 16 June, at the 2012 GCLS Literary Awards Ceremony in Minneapolis. Bated breath, bated breath. May the best women win!

Eat Your Heart Out has also been the recipient of still more rave reviews since the last time I posted about it here on the front page. In print: Black Static in the UK, the Bay Area Reporter on the left coast, Rue Morgue magazine. On the web: the Edge network, Lambda Literary Review, and the book blog The Rainbow Reader. Check out excerpts and (as available) links here.

Brand-new news! Official announcement, more or less. BrazenHead’s third release will be The Grigori by Joshua Skye. The Grigori is a thoroughly disturbing dark fantasy set in contemporary Pittsburgh, about which I will say nothing more (until I compose some marketing copy…) except two words: Angel. Meth. Joshua and I are just beginning the final edit phase prior to layout and, barring unforeseen hiccups, the book should be out by 1 November.

Meanwhile, here’s an interview with Joshua published in the Pride edition of Philadelphia Gay News. You can also explore his other work at his official site. 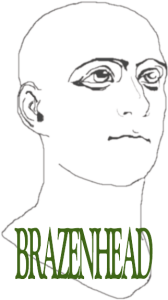